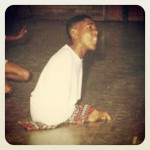 Muzi Pooe Participated in the 7th All Africa Games 99 in South Africa.

Muzi was awarded by APD Achiever of the year certificate and wording on the certificate read.

The Association for the Physically Disabled – Greater Johannesburg proudly presents this award to Muzikayise Pooe not only for his courage in managing the challenges of his everyday life, but for his devotion and determination which has lead to him winning a solo award of the SADMA which could be the start of a successful singing career. We believe that he will pursue his future goals with the same vigor and continue to act as an inspiration for all people with physical disabilities.

All you need is love helped the group to record their music in professional studio.
Invited to perform at Wits University for disability awareness campaign organized by Wits.
Performed on Gospel Time music show on SABC 2
Featured on Crux TV show.
Invited by the International Church of God to perform.
Performed at the fair well party for Ithembelihle LSEN School.
Performed at Shivava Café.
2008